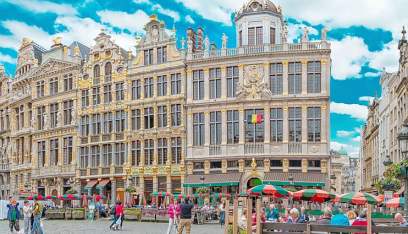 The economy of Brussels' city is dominated by activities within the service and public service industries.

The Brussels Capital Region accounts for nearly 9% of all exports from Belgium, and service industries add another 9%. Some of the important companies include Volkswagen manufacturing plant (thousands of people are working at its production plant), Toyota Motor and DaimlerChrysler. The foremost areas of production have been electronics, chemicals, printing, publishing, clothing, telecommunications, aircraft construction, and the food industry.

The quality of life in Belgium is said to be very high as it is listed in the world’s top 20 countries in relation to life expectancy and GDP. The average Belgian pays one of the highest rates of income tax but one must take into consideration that their health service is one of the best in the world, especially when compared to the UK’s NHS (National Health Service).

Brussels is known as the Capital of the European Union and is home to many national and multinational companies. There are approximately 50,000 businesses, of which around 2200 are foreign. This number is constantly increasing and can well explain the role of Brussels in the European subcontinent. Being the headquarters of the European Union, there has been a significant increase in job opportunities as well as foreigners fleeing to the capital. Many diplomats, civil servants, interpreters, consultants and many more professionals have made the city of Brussels their home.

Brussels holds more than 1,000 business conferences annually, making it the fourth most popular conference city in Europe. It is rated as the seventh most important financial centre in the world. The city’s infrastructure is very favourable in terms of starting up a new business. House prices have also increased in recent years, especially with the increase of young professionals settling down in Brussels making it the most expensive city to live in Belgium. Also for expatriates, the city is a blessing in terms of taxes, for every penny spent out of the city is tax deductible. About 60% of foreign companies have their headquarters in Brussels which include well-known companies like Delhaize, Besix, Sabca, etc.

Brussels’ EU involvement has placed the capital on the map and job opportunities have significantly increased; such as workers needed for the embassy, for the thousands of international companies erected in the last decade, as well as the workforces needed to accommodate one of the largest Press Medias in the world. One would assume that the local Belgians would be thriving amongst the bustling economic activities. However, considering that the French and Dutch locals are the majority inhabitants, it is surprising that they are in fact the minority working for the EU institutions which has caused some rifts in society.

Brussels has had to cope and will have to continue to cope with many teething problems in accommodating such a large and important role in the European Union. It is understandable that many will be against change, but without the EU involvement, Brussels may have still been stuck in the past. The city has now become more vibrant and innovative, with better developments and transport services. The heavy investment since the late 1900’s has certainly paid off as the revolutionary city of Brussels has contributed to the county’s overall growth levels, with Belgium now being one of the world’s top economic performers.

Brussels is a popular confenerce city in Europe that holds more than 1,000 business conferences every year. The Brussels city is home to around 50,000 businesses and tourism is one of the florishing industries offering luxury hotels, restaurants etc.