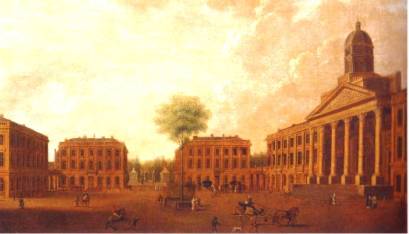 The founding of Brussels dates back to around 979 when Duke Charles passed on the relics of Saint Gudula from Moorsel to the Saint Gaugericus chapel in Brussels. Today the chapel is located on the holy island of Saint Gaugericus. On this same very island Charles of France; the expelled son of King Louis IV built the first permanent fortification when The Holy Roman Emperor Otto II gave the duchy of Lower Lotharingia to him. In those days Saint Gaugericus island was recognised as the Island of Saint-Gorik. Carl of France decided to build a castrum on the island which laid the foundation of Brussels city.

By the start of the 10th century, after the death of Charles, Low-Lorraine was taken in possession by Lambert of Leuvenm Charles' son. In 1047, his son Lambert II of Leuven established the Saint Gudula chapter. He also started expanding the city by building a new castrum and fortification walls.

In the 12th century, the small town became an important stopover on the commercial road from Bruges to Cologne. The village benefited from this favourable position, and as the population started multiplying to 30,000, the nearby marshes were wiped out to allow for further expansion. Around 1183-1184 the Counts of Leuven were elevated to the position of Dukes of Brabant.

In 1357 to 1379 a new city wall was constructed as the former one was already proving to be too small: the inner ring or 'pentagon' now followed its course.

In the 15th century, due to the wedding of heiress Margaret III of Flanders with Philip the Bold, Duke of Burgundy, a new Duke of Brabant surfaced from the House of Valois, their son Antoine. Another line of descent appeared from the Habsburgs when Maximilian I of Austria married Mary of Burgundy, who was born in Brussels. Due to such sudden variations in the descendants, Brabant lost its independence, but Brussels flourished by becoming the Princely Capital of the prosperous Low Countries.

Charles V became the Emperor of Low Countries since 1506, in spite of being just six years old. His aunt Margaret of Austria unofficial governed the Low Countries till the year 1515. In 1516 Charles V was declared King of Spain in a ceremony conducted in the Cathedral of Saint Gudule. When Maximilian I died in 1519, Charles V became the new archduke of the Austrian Empire. However, in the year 1555 Emperor Charles V resigned. His successor Philip II had a major difference with the William of Orange, supervisor over Holland, Zealand and Utrecht. William of Orange was a broadminded ruler and did not pay much heed to Philip II quarrels. Brussels nevertheless suffered under the cruel Duke of Alva, an official representative of Philip II. A revolution took place in Brussels and the people with the help of William of Orange chased Alva away.

Brussels was attacked by troops sent by King Louis XIV of France, in 1695. This most caustic event in the form of a bombardment destroyed the city's heart and more than 4,000 houses including the medieval buildings on the Grote Market or Grand Place. One-third of the city was razed down.

In 1830 Dutch emperor William I had to leave the Belgian country when the successful independence struggle broke out in Brussels. The Belgian revolution arose in Brussels after a performance of Auber's opera La Muette de Portici at De Munt or La Monnaie theatre.

On the 21st July 1831 the first Belgian king, Leopold I, ascended the throne. Brussels became the capital of the new kingdom of Belgium. A long period of rebuilding the city of Brussels began, where new and impressive buildings were built and the city walls were pulled down. International congresses were arranged and scientific organisations were established. Work of foreign artists, philosophers and scientists were also given encouragement in Brussels.

After WW11, Brussels had been damaged substantially and plans were implemented to restructure the region. The region was divided into two, the Flanders and the Walloon Provinces, with restricted powers. The Brussels Capital Region was founded on June 18, 1989 with its own government and capital.

Belgium was one of the first countries to join the European Union and along with the association of several other European organisations, more importantly, it became the headquarters of the European Economic Community (1957).

Brussels’ new involvement with the EU saw many changes within the city centre. There were many developments that began and were not completed for a while as those responsible had other priorities in mind, therefore the city was majorly disrupted and many locals even lost their homes to railway structures, such as the Gare Centrale that had uprooted many buildings. Further structural transformations followed in 1958 when Brussels was set to host the World Fair; the old city walls surrounding the centre were rapidly changed into a network of motorway links making the city easily accessible.

In 1967 Brussels became the headquarters of NATO. By that time, a lot of ancient Brussels had been torn apart and modern buildings were erected in place to accommodate the EU integration, for example, the Berlaymont building had opened which consisted of offices belonging to the European Economic Community (EEC).

The highly respected King Baudouin who prevented Belgium from dividing passed away in 1993. His brother King Albert II then took over. In 2001 Brussels officially became the Capital of Europe and the Euro currency came into place. Many new industries and plants continued spurting up, resulting in difficulty to balance historic treasure and modern infrastructure. Furthermore, the city was bombarded by officials, diplomats and other consultants all involved with the European Union.